Today, boo, my homegurl and I went to the Baylor vs Texas Tech game at AT&T Stadium in Arlington, Texas. Lemme tell you not only does that damn stadium look massive on the outside but it looks even more massive on the inside. The House that Jerry Jones Built is a gargantuan building. See look for yourself!! 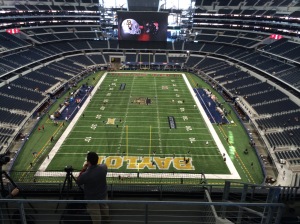 Being that I’m a Texans fan, I have to say that shit is impressive!! Like I can even front or hate. Jerry’s World is an a ma zing building. And that display screen!!!!! My gawd that has to be the biggest thing I’ve ever seen. Like this screen is… It’s… Lawd have mercy. I know e’ry damn thang in Texas is bigger but that screen!!! Ugh loooooook at it!!!

That mess is… I’m speechless. I have no words whatsoever about that screen. Um um um my lawd!

Okay sorry moving away from the screen now because obviously I could easily go on and on about that damn screen.

Aside from gawking at AT&T Stadium, it was a great day. We literally sat in the nosebleeds and lemme tell you those seats were the most uncomfortable seats I’ve ever sat in. I was okay for the first and second quarter but then my legs started to hurt beyond what I could usually tolerate. There just wasn’t enough room to stretch out. I think Boo is right if we do this again we will definitely have to splurge for better seats or at least seats that do not require to climb Mount Kilimanjaro. Such a ratchetly long hike. R A T C H E T!!

The good news is Baylor won. The bad news is the QB for Texas Tech is a baaaaaaaaaaad man! First of all, he’s a freshman. Secondly, that kid threw for more than 500 yards today. Thirdly, he can schlang da rock like its a piece of paper. I dunno where Kliff Klingsbury found that kid but he best keep him around all four years because he’s going to be Tech’s ticket to greatness!

Now I know I’m praising Tech but I can’t even front. The Baylor defense sucks. It sucks so bad there aren’t enough negative words in the dictionary to describe the level in which Baylor defense sucks. They missed simple textbook fundamental tackles. Coverage was blown every which way. And they allowed four too many touchdowns. Not that I thought Tech would be a rollover but they gave Baylor more than a solid run for their money. Tech made Baylor look like the University of Kansas. I don’t mean to insult KU but there’s a reason why they’re last in the Big 12 Conference. The way Baylor was playing you’d think the team was reverting back to the Coach Steele era. Baylor fans you remember that debacle!

Ugh and Bryce Petty left the game due to concussion like symptoms. Sean Russell did well but he didn’t do as well as he has in previous weeks. It was just a horrible and embarrassing game. Gawd I hope Baylor cleans up their act because next weekend we play Kansas State who’s been WAITING to tap some Baylor ass all season long.

At this point Baylor gon need everything short of a miracle in order to get to the playoffs. They have to play smart and precise football. That means less mistakes and far less penalties! Gawd those damn mutha fuckin penalties are just a thorn in our side. If we can cut down on the team penalties and force the our opponents to make more mistakes, we’d be golden. Sigh yeah we’ll see how that goes next week.