Sooooooo as you guys know, this is my second stint at being natural. I started my transition in January 2013 and big chopped for the second time in May 2013. If you go back through my posts between then and now, you’ll notice Luquisha has grown quite a bit. In fact, she’s growing far faster than I ever than I thought she would. Of course, I think a lot of her rapid growth is due to me actually taking care of her and being mindful of what she likes and doesn’t like.

I’ve also stopped being so dern lustful over other people’s luxurious kinky/curly/coily ringlets. Yaaaas I said lustful. During my first attempt at being natural, my biggest downfall was wanting hair like my then co worker. I want big hair that covered my ears in the winter and that I could put up in a bun during the summer. I wanted the soft bouncy curls my baby sister has currently and so many others I saw out and about and on the blogs.

I didn’t realize that every natural haired person has a different texture. Seriously, if no two strands of my own hair was the same how could I expect to have hair like the next Napturl? So I promised Luquisha that I wouldn’t get to outta control with the hair envy and that I’d be more patient. And I have uhhh for the most part.

Buuuuuuut then I did a thing. It’s important to mention that I don’t do this ummm thing often nor would I contemplate doing this thing more than maybe twice a year; primarily because of cost. Look at the picture below. See the top right picture labeled “after”? Yeah. That happened two maybe three weeks ago. 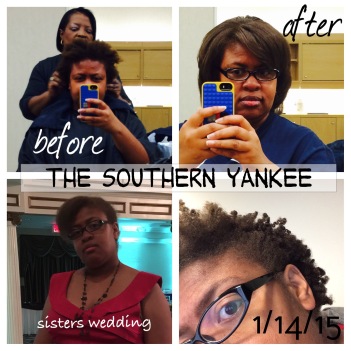 My baby sister got married on January 3rd and I wanted to do something different. I also wanted to see exactly how much Luquisha had grown in the last year and months. She’s pretty dern long. At least long by my standards.
The back is right below my collarbone. The sides are almost to the middle of my neck. And my bangs reach my top lip. Yooooo shrinkage is REAL! It amazes me how shrinkage makes natural hair appear so much shorter than it is in actuality.

For two solid weeks, Luquisha had bounce, flip and moved effortlessly in the wind. Miss May trimmed her into layers which looked nice and defined prior to leaving the salon. But once I left, the wind sorta destroyed the definition. Stupid Texas weather really put a damper on my little hair straightening experiment. It was nasty and/or windy all the way up to the day of the wedding. I wore beanies and hats throughout the two weeks but they didn’t really prevent the moisture from frizzing out my hair.

Anyway for the wedding, lower left picture, I did an up do with a right bang scoop. The scoop was on point… before I left the house. But outside the house, it didn’t stand a chance. I put the remainder of my hair into a faux bun by putting it into a high ponytail then tucked and pinned into the shape of a bun. It was quite cute. I wish I had remembered to take pictures of it tho. It was really really cute. I was so proud of myself for thinking of it because Luquisha wasn’t going to behave if I wore her in a bob. It was just too windy that day. Plus I wasn’t trying to use too much heat on my hair as I didn’t want to have heat damage later.

So let’s discuss the pros and cons having my hair flat ironed.

I get my hair trimmed maybe once a quarter (every three months). In doing these quarterly trims, I am able to see how long she is but she’s not completely laid and she shrinks back up after a day or two. So by having my hair flat ironed, Luquisha lays flatter so I can really see the actual length without any assumptions.

If there’s one thing I absolutely loved about having straight hair was the fact that Luquisha had flip and bounce. My hair is soft, light and very airy when it’s straight so I love flipping the ends and having bounce when I walk.

Ugh! Luquisha was LAID everywhere else but the ends. As soon as I stepped into the moist air, my ends went wild and crazy. It was annoying as fuck. Plus when I’d have on a beanie or hat, my ends would make my neck itchy. You know what I mean. Don’t you? They weren’t as soft or laid as the rest of my hair. This prolly could have been rectified with product that would coat the hair enough to make it heavier but I didn’t want too much buildup.

So it’s been a good five minutes since I had straight hair. I forgot how to maintain straight hair. The majority of my products are water based and I was afraid the water would cause Luquisha to revert back to curly. So I used mostly oils the week of the wedding. I found some KeriCare oil moisturizer in my product basket as well as apricot oil and the Garnier Fructis Marvelous Oils I bought a few months ago. These worked for a little bit but caused slight buildup.

Con: cost is a muthafucka

I’m sure what I paid is nothing compared to how much some women pay to get their hair done. My beautician is employed by JcPenney Salon and is a Master Stylist. So the cost is going to be pretty comparable to getting a relaxer because she shampoo/deep conditioning, blow drying, trim/cut and flat ironing are all separate costs. A regular appointment for me costs around $40 with tip. This appointment was $100 with tip but I knew it was going to cost a lot so is by far not a complaint. But if I wanted to get Luquisha straightened more often it would end up totaling the amount I would spend a year on relaxers which is not an option for my wallet anymore.

There were some other pros and cons but those mentioned above are what really stood out to me. Despite the cons, I would probably get my hair straighten again because it’s a way for me to see my hair’s true length. Well at least until she gets longer and heavier. Like I said, the shrinkage is so very real and Luquisha looks so much shorter than in reality. The good news is when I deep conditioned my hair the other day my 4c coils came back almost instantly. I couldn’t believe how quickly Luquisha soaked up the water. Cheeky heffa was prolly waiting for me to wash her. Grrr… Anyway stay tuned for an updated regimen post as I had to change how I moisturize Luquisha because of the frigid spastic Texas winter.