God is God no matter what you look like and/or who you are.

I wish more people understood and preached this very simple yet complex concept. At the end of the day, we are all the same and we all seek the same sort of confirmation that there is indeed a God or a Godde, as the post mentions. 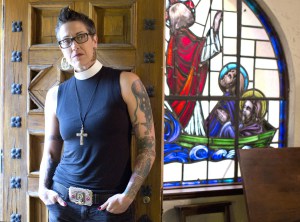 What does a “godly” person look like? Is there a right way to love God? Is there a correct path to follow Jesus?

I just returned from my fourth “Christian” conference of the year.

January I was in Chicago for the Gay Christian Network Annual Conference, where some 700 people gathered to celebrate, learn, and share community. Rob and I were among 200 parents, the rest were LGBTQ people, mostly in their 20s and 30s, gathered in the name of Christ. The worship, the camaraderie, the joy of the Lord, filled the conference hall. If you had been there, you would have basked in it! No denomination, no distinction, no made to feel second-class. They’re just brothers and sisters in Christ, full of gratitude for Christ in us, the hope of glory.

In June I returned to Chicago for a “By Parents, For Parents” conference. Parents of LGBTQ…

I sing because I’m happy

I sing because I’m free

His eye is on the sparrow

While there are probably more than a couple of dozen versions of this song, my favorite version is from the Sister 2: Back In The Habit Soundtrack. I love the harmonies as well as the rise and falls of the voices of Lauryn Hill and Tanya Blount. Every time I hear it play on my iPod, it takes me back to when my cousins and I used to sing in church every Sunday. We were known as “The Trio”. Every damn Sunday we had to sing at the request of our then pastor Rev. Cones. I can’t say that I disliked singing with my cousins because we actually sang really well together. But at the same time, it felt like a chore instead of it being something fun or something we actually enjoyed together. Sometimes I wish I could go back to those days. When things were simple and not so “adult” like.

I listen to music all day every day. Partly to drown out all the annoying sound chitter chatter in the office. Partly to keep me from going off on people. So it is safe to say, I hear music but I may or may not actively listen. Ladies reading this post you know exactly what I mean between hearing and actually listening.

But when my music app plays Day 12’s song, every thought in my mind seem to cease. I stop paying attention to mindless babble and the various nuances that annoy me to no utter end.

Of course, most Gospel songs have that effect on me anyway because Gospel is the one genre, aside from Classical, that really calms my nerves.

Anyway… hope you enjoy the selection for this post.

A few months ago, I had the opportunity to take a business trip to the fabulous ever so very relaxing Terranea Resort in Palos Verdes, California. When I say this place was the shiznit it was the SHIIIIIIT! LOL

Take a look at the pictures below. 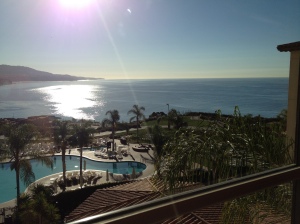 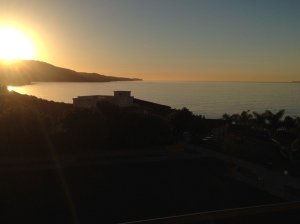 On the way to the airport

I wish I would have taken pictures of the food because words cannot possibly describe how a-ma-zing-ly delicious it tasted. I’m pretty sure I could find the same type of food here in Texas my mouth is watering thinking about it. HOWEVER, I’m sure part of the reason it tasted sooooo damn scrumptious was because I was mildly on vacation. Yes it was a work-cation. And yes I was with the boss for three days but it was the BEST work-cation I’ve ever had in my LIFE! Well it was the only work-cation in my career so I suppose “good things DO come to those who wait”.

But at the same time, I am BEYOND grateful to have been given the opportunity to attend the conference in California. For years, I waited for this opportunity to arise and for years it didn’t. Without going into too many details, this work-cation, as I call it, is a tremendous opportunity to meet people I’ve only heard on the telephone or corresponded with via emails and instant messages. Opportunities such as this don’t happen every day, every month or even every year. Sometimes in life, one just wants one opportunity to see what the whole hoopla is about and this was my one opportunity.

God has been extremely good to me. Right when I’m about to throw in the towel, He always throws the most amazing surprises my way. Even though I was sick the entire time, this trip helped to relieve the stress and uptightness I had been feeling during the months of August and September. That shit was no joke mayne! This trip also seemed to solidify that I finally had someone locally on Team “Lets Develop Cheycara’s Work Related Skills” which is all I’ve wanted from this place. Give me more! More development. More opportunities to prove I’m not the average employee. That just because I’m quiet and mildly shy yes the girl with the mouth of a damn SAILOR can be shy that I must not be able to handle any- and everything thrown at me.

It was an amazing trip that I will never ever forget for as long as I live.

Since Day 25: “The Reason You Believe You’re Still Alive Today” and Day 26: “Have You Ever Thought About Giving Up on Life? If so, when and why?” seem to coincide with each other, I decided to give my readers a two for one post special. And it finally catches me up to the day I’m supposed to be on!! Yaaaaaay ME!

You know, God is a funny person. He so funny that he puts stuff in your path and life that make you stop and think about all the shit filled times that could have been your last. All the times when life in general just wasn’t bearable anymore. The times you wanted to off yourself but nothing in this world could convince you of otherwise. So you come to the conclusion of this… The reason why I’m still alive is because God is not finished with me yet. I mean what other reason could there be???

I’ve had an emotionally rough life. My emotions seemed to spiral out of control when my grandfather passed away towards the end of my sixth grade year. Up to that point in my life, I never really thought about life without Papa. I just figured he would be with me for a really long time or at least until I was old enough to understand what it meant emotionally to lose someone. I spent the majority of my sixth grade year in trouble with my family because my grades were slipping. Well shit I was sleepy all the time because I was going with them to the hospital. I sometimes had to spend the night in my grandfather’s hospital room because my mother was working nights. A year of that shit takes a toll on a twelve year old. Instead of comforting me or even understanding what was going on, I got cussed out. My nosy ass snitch of a grandmother would tell my mother’s youngest sister who for some reason assumed the role of head of the family and she would call and proceed to belittle and cuss me out while my grandmother just say there and fiddled with her thumbs. I think that was about the time I started crying myself to sleep at night because I just couldn’t handle grandma and my aunt’s constant nick picking. My mother was no help because she never defended me against them. And I couldn’t talk to her about anything because she always answered with some sort of biblical reference. I didn’t want to hear that. I wanted my mother to somehow make things better but she didn’t.

In high school, the shit hit the fan so hard, the fan and I both broke. Like most kids, I was trying to figure out my place in the world. I enjoyed high school. I was involved in various after school activities and my grades were off the chain. But for my grandmother, nothing I did was good enough especially after she found out I lost my virginity the summer of my junior year to a white boy preacher’s kid. From that point on, she deemed me the devil’s spawn and I needed saving. I should probably mention that she hated the fact I was dating a white boy and had no qualms about saying how she disliked me having friends who were not black. It was just one fucking thing after another. I should also mention that after finding out I lost my virginity that grandma thought I was sleeping with every male friend and/or guy I came across. It didn’t matter that nothing she said about me was true. So as long as long as she believed it to be true it was true.

I think that was the beginning stages of my depression. I felt powerless. My voice wasn’t getting me anywhere. My protests to my mother about grandma and her antics were falling upon death ears. To this day, I still cry when I think about all the nasty shit she used to say to me. I just don’t understand how anyone can belittle and break a person to the point of wanting to take drastic measures to make sure this doesn’t happen again. There were times when I would pray so hard for God to take me away. To bring back my grandfather and take me instead. I remember saying I don’t want to be here anymore. I can’t handle this. Thankfully I never really got to the point of actually offing myself. Thankfully God blessed me with friends who would rescue me from my hell on a regular basis.

To add to my already up and down bouts of depression, when I found out I was pregnant, I completely lost it! My emotions went every which way but the correct way. I didn’t want to keep her because I was still in school and part of me thought my family would not help me. My baby’s daddy wasn’t any help either. He never went to visit me nor did he go to the hospital when she was born. After my aunt and uncle took my daughter home with them, I sunk in a much deeper depression because that was the beginning of my estranged relationship with my mother and her family. I lost more than my daughter and a large part of myself that day in the hospital when I signed my parental rights away.

Fast forward to 2005, when Granny (my paternal grandmother) passed away. She was the only person in my family that accepted me for me. Flaws and all. How I miss her so very much because I could talk to her about everything. It didn’t matter what I said or how I said she understood I just needed someone to be there. And she was. I wholeheartedly believe she was God’s way of saving my life. She encouraged me to be me. She gave me the confidence to be whoever I wanted so as long as I was happy.

So there you have it. Thanks for reading…