My big sis sent this to me the other day and it got me thinking. 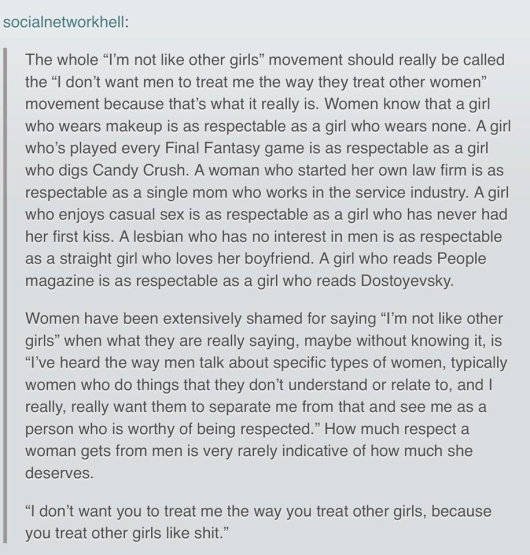 I have to say in my opinion I’m not at all like most girls.

Cliché or not, I pride myself on being different. On not conforming to what religious conservatives deem how my race and gender should behave and look like. For not focusing my life on the media’s portrayal of what a black woman should be.

I’m very much a tomboy who thoroughly enjoys cursing and swearing, watching AND playing sports as well as throwing back a cold brew or a stiff put hair on your chest drank. I talk mad shit wit the boys and make lewd and inappropriate jokes. I’m a car enthusiast and aspiring mechanic. Did I mentioned I fucking HATE dressing like a damn girl? absolutely loathe that shit! You have NO idea!

I have wildly crazy natural hair that seems to have a mind of her own but I don’t  straighten it because someone else tells me to or because society says I’m not pretty. Luquisha is hur to stay bitches!

I have a big ass but I don’t really try to accentuate it to make it seem like my milkshake brings all the boys to the yard or even come swarming towards me.

My attitude at times is not because I’m uneducated or don’t got common fucking sense cuz I got a fucking degree from a top notch school mayne but because I like to be funny and adapt to my surroundings and people around me.

Lately, there seems to be a great amount of talk about women and how we should behave, think, feel and exist.

Women are expected dress a certain way otherwise we must be a two dollar hoe just cuz we show some damn skin or boobs or leg.

Women are expected to be more inclined to stay at home, clean house, take care of the churrin stupid grown ass child included, have a hot meal on the table at least twice a day and put out whenever and however the husband pleases.

We can’t be independent and do for ourselves because we’re the weaker sex. We can be sexualized against our will but not sexual on our own accord.

We can’t be President or a coach in the pros.

We cannot possibly be capable of running a successful revenue generating company.

Nope women can’t possibly ever be as omnipresent, professional, deserving of the good life or intelligent as the men who are consistently trying to gain the upper hand by backhandeding their peers. Don’t get it twisted women are just as conniving and ruthless. But unfortunately, women, especially women of color, are under paid significantly compared to a male counterpart in the same position, skill sets and tenure.

This: Women deserve to be treated better. Women deserve to be revered as worthy of anything we put our damn minds too. Young girls like my daughter and nieces should be able to name more than a handful of women who have done something significant in the world’s history.

Women should be afforded the same opportunities as men in everything. Not because we can do everything better because we absolutely can but because the next generation needs to see that. How are we to tell our daughters, nieces, sisters, granddaughters and cousins you can be anything your heart desires if we, the current adults, don’t first set the example? No I’m not saying our sons, brothers, grandsons, etc can’t be whatever they want but in all honesty, boys obviously have it easier unless they’re gay; which then it’s a whole other ball game and certainly a whole other blog post.

Why is it women are good enough to be wives and mothers but not everything else under the sun?

Why are we selfish for wanting a career over family?

Why must we be belittled for having an opinion or fuck even an idea?

Why can’t we be equal citizens under the law instead of being subject to a religiously conservative white male’s opinion of who we are and should be?

Thanks for reading…
the southern yankee

I am an aspiring writer trying to find my place in the world. Writing makes me happy, save lives much like coffee, and keeps me grounded. To honestly know me is to understand my way of thinking, my quirky, sarcastic side comments, and left uppercut verbal jabs and side-eye death stares. I’m simplistic but can often be very complex in nature. I love life to the absolute fullest, but I am human; therefore, I have more than my fair share of ups and downs. I am a giant kid, so being goofy comes naturally to me. I secretly strive to be the next Ernest Hemingway, J.K. Rowling, Zora Neale Hurston, or Shonda Rhimes. I openly and stupidly wear every bit of my heart on my sleeve and refuse to apologize for or minimize my true, unedited feelings. View all posts by Nerdtastic, Write?

3 thoughts on “Something to Ponder: I’m Not Like Other Girls”

Tell Me What You Think... Cancel reply

This site uses Akismet to reduce spam. Learn how your comment data is processed.